The halcyon days of the Maxell XLII 90

I just did something that I've been meaning to do since the beginning of the summer: I read an anthology of short essays called Mix Tape: The Art of Cassette Culture. 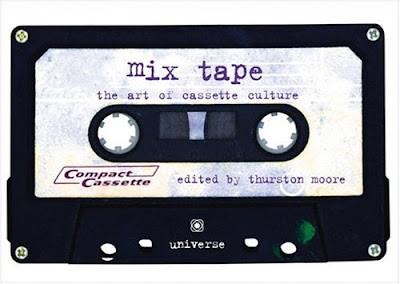 This book, which was edited by Sonic Youth's Thurston Moore, is made especially for audiophiles who spent their Reagan era youths putting together mix tapes for any number of reasons -- they needed something to chuck into the Walkman for the week, they were disgusted with what they heard on commercial radio, they wanted to impress a guy or girl, or they just wanted to share music that they loved with other like-minded music fans.

Each essay centers on a mix tape or series of tapes that the author either made or received from someone else. All of the essays are written by artsy types--writers, poets, musicians, artists, filmmakers, photographers--so each author adds some nice flair to the nostalgia that the book evokes for '80's kids like me. Here's an excerpt from one of the essays, which is by Dean Wareham of Galaxie 500 and Luna:


It takes time and effort to put a mix tape together. The time spent implies an emotional connection with the recipient. It might be a desire to go to bed, or to share ideas. The message of the tape might be: I love you. I think about you all the time. Listen to how I feel about you. Or, maybe: I love me. I am a tasteful person who listens to tasty things. This tape tells you all about me. There is something narcissistic about making someone a tape, and the act of giving the tape puts the recipient in our debt somewhat. Like all gifts, the mix tape comes with strings attached.

For me, that excerpt captures the essence of what mix tapes were all about. It also touches on the difference between creating a mix tape, which often requires hours (and sometimes, days) of emotional investment, and creating an iPod playlist, which seems kind of antiseptic and cold by comparison because of the ease of putting one together.

As you might imagine, I loved the book because I have put together a fair number of mix tapes since the mid-'80's. I DJed in college, so I had access to a massive vinyl collection. I used to make tapes for friends, for myself, and yes, for girls. Many of the tapes that I made for myself are sitting in a box in the downstairs closet, long neglected due to today's digital music culture. I still have the first one that I dubbed as a "me" tape. It doesn't have a date on it, but by my best estimate, I made it in 1987. It's called "College Radio - Progressively Warped Tunes," which has to be the lamest name ever to grace a mix tape because (a) some of the songs were being played constantly on commercial radio at the time, and (b) there aren't any "warped" songs on the tape save for the Dead Milkmen's "Surfin' Cow." I suppose I thought I was being clever with the name, but whenever I see it today, I can't help but laugh. 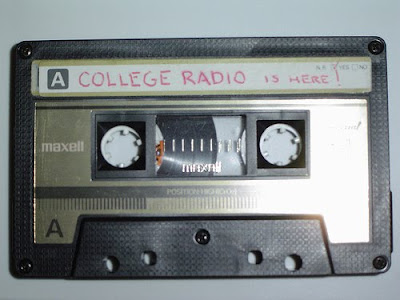 Side A ("College Radio is Here!"):
New Sensation - INXS
True Faith - New Order
Why Can't I Be You? - The Cure
Lips Like Sugar - Echo & The Bunnymen
Eighties - Killing Joke
Round Round - Belouis Some
Only a Memory - The Smithereens
Radio Free Europe - R.E.M.
Surfin' Cow - Dead Milkmen
Never Say When - The dB's
Solitude Standing - Suzanne Vega

Side B ("College Radio Strikes Again!"):
Cry Little Sister - Gerard McMann
Love Missle F1-11 - Sigue Sigue Sputnik
Hot Hot Hot!!! - The Cure
New Dress - Depeche Mode
The One Thing - INXS
Bedbugs & Ballyhoo - Echo & The Bunnymen
Deep Black - The Smithereens
The Three Sunrises - U2
Burning Down - R.E.M.
I Lie - The dB's
KK Suck2 - The Dead Milkmen
It's The End of The World As We Know It - R.E.M.

Granted, it's not a mix of hard-to-find hardcore punk B-sides, but I still like it all the same. It brings back memories of summer days at West Beach, where I would use Ye Olde Boombox to play Ye Old Mix Tape.

If you're an old mix tape junkie, I highly recommend Mix Tape. It's a quick, entertaining, and nostalgic read. And I can't neglect to mention that many of the essays are accompanied by artwork from the tapes discussed.

Buy Mix Tape at Amazon.
Posted by Jim at 7:32 PM No comments:

Email ThisBlogThis!Share to TwitterShare to FacebookShare to Pinterest
Labels: Books

Five years ago, there was a blog called 11 a.m. Air Raid. Not many people read it, but those who did enjoyed it (I think). Back then, 11 a.m. Air Raid focused on a handful of things, mostly contemporary culture and the City of Indianapolis. And that's pretty much what this new edition of 11 a.m. Air Raid will focus on. I'll try to stay away from things I don't know too much about or stuff that's overdone elsewhere: politics, celebrity gossip, and technology, for instance.

If you were a reader five years ago, welcome back. If you're a new reader, welcome. I hope you enjoy.
Posted by Jim at 6:54 PM No comments:

Email ThisBlogThis!Share to TwitterShare to FacebookShare to Pinterest
Labels: Here we are again
Home
Subscribe to: Posts (Atom)

Other Writings from 11 a.m. Air Raid